I used to eat at home a lot more than I do now.

It wasn’t because I wanted to avoid certain types of food. I will try and can enjoy pretty much anything (but, try to give me bondegi and I will slap you on sight). Korean food. Japanese. Indian. Thai. “American” food, which, really, what is that exactly? Burgers? Didn’t hamburgers come from Hamburg, Germany? Digression.

Don’t get me wrong, I still eat at home. I love to eat at home. But, it long stopped being because I was frightened I was going to fuck up the hangeul on the menu at the local Korean restaurant.

Eleven months and one day ago, when I arrived in South Korea for the third time in eight years, I was scared. Can you blame me? I could barely read the language and I hated being stared at when I couldn’t figure out that the promotional photo of food on the wall wasn’t actually on the menu. It also was the third time in eight years, the first two being somewhat failed attempts at spending a year teaching English in a foreign country. I was a little gun shy.

It seems odd now, though, since I cannot imagine being scared of going into some “Omma and Oppa” 식당 and not being able to order at least something. Kimchi Jigae, Soon-Doo-Boo. Something, even if it’s one of those items I have ordered a hundred times or more. 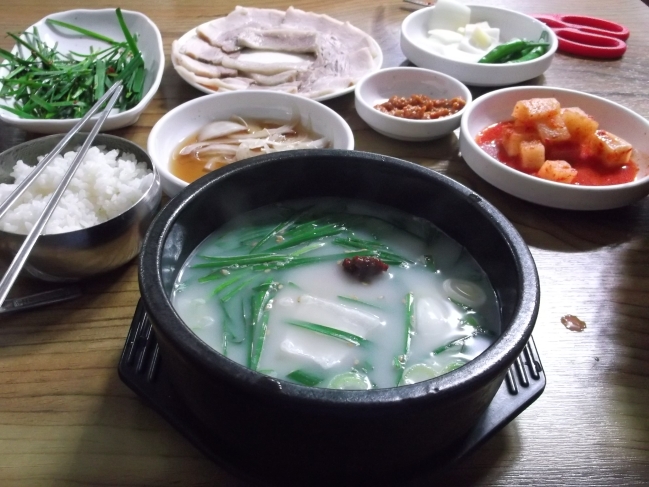 But, to get to a hundred, you have to start with one. Before 돼지국밥 and my obsession with its boiled pork, broth and rice combination, there needed to be a pledge.

In June 2013, I vowed I would visit a new restaurant at least once a week. By then, four months into my time here in Busan, I had gotten reasonably comfortable with going to Woncho Gimbap, my local gimbap shop, if only for the aforementioned familiar items. I also went to the Jjamppong place now and then only because my former co-worker, Michael, had taken me there pretty early on. And even then I only ordered Jjamppong. Others would follow, in slow time.

It was warmer by June and I often walked the 20-minute walk from my school to my apartment, passing several small, brightly-lit, gaudy restaurants along my way. These were the ones where the couple who owned them occasionally lived in the back. Occasionally, you might even see through the sliding doors, where they were also enjoying their 저녁 식사.

But, it took time. Eventually, I was eating at a new restaurant every week or so. Eventually, it became unnecessary to stick to such a “one new restaurant a week” pledge. Eventually, enough time had passed where I would go to a restaurant and one of the employees–remembering one of their few waygookin customers in deeply Korean Jangnim-dong–would remark in English, “long time no see,” like they did tonight. 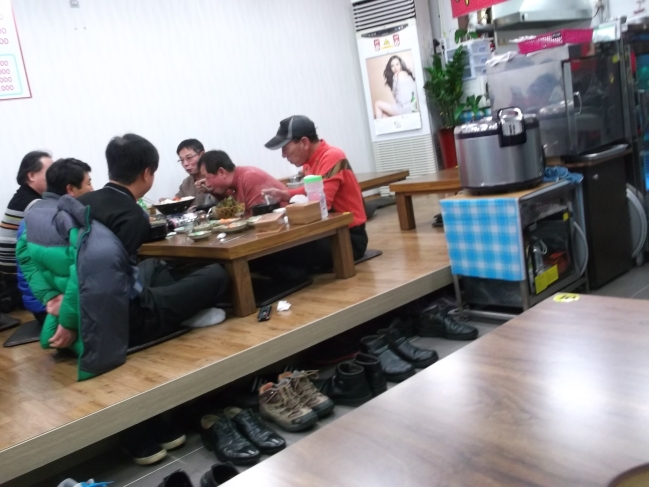 The owner (left) of this particular restaurant, near my apartment, shook my hand when I came in. A couple of diners in the room stared. It was … awkward.

There has been so much Korean food consumed since I made that pledge during one of those walks. An absurd amount of Korean food, really. So much kimchi. So many probiotics.

Somewhere along the way, I was introduced to 돼지국밥.

It became a running joke. Here is my second 돼지국밥 meal of the week. My third. My friend Leslie sent me a link to a song about it and we pledged to sing it together in Noraebang someday.

We haven’t yet, which is only one reason why, despite having less than a month to go in my one-year contract, I am not thinking about life after Korea. I have not visited Jeju, have not seen the DMZ, only been to Seoul once. Have not had probably numerous, delicious Korean delicacies I don’t even know exist. Eleven months in, there’s still so much to do.

When did this happen? I am sure there were moments over the past almost-one-year that I thought 12 months was enough. I certainly thought it when I was in Korea in 2010 and 2005. What happened? What changed?

(The people you meet. The people whom you are reunited. The connections you make. The places you explore. The adventures you endeavor to encounter. The meals you consume.)

I will have time to think about it. Maybe another year. Maybe over a drink. Thankfully, Korea’s beer is improving. So, crack open a Queen’s Ale and join me in mulling over where we were when we went from “only a few more months to go” to “well, what’s next?” I am excited. Aren’t you?