It’s Easy (and Cheap!) to Cook at Home in Korea

Food is a connection to culture.

Whether it’s for comfort or simply sustenance, food is essential. Of course, eating for survival is important, but isn’t it better when it’s more than just a way to stay alive? Food’s fun. To make. To talk about. To write about, for sure. But, mostly to eat.

For people living in a new country, a familiar food can help get them over the initial growing pains that usually come before, during and/or after the Honeymoon Phase phases out. Until there was one in pretty much every neighborhood, news of a new Subway restaurant opening in Busan was met with praise far outsized compared to how people respond when another one opens in a strip mall in New Jersey.  Likewise, when people leave Korea, many will give themselves a nostalgia injection with a trip to a Korean restaurant, or a Korean supermarket if they’re lucky to live near one, to have a taste of something that is connected to a very specific place and point in their lives.

When I first arrived in Jinju in 2005, my diet was mostly things served at my hagwon or the few things I could recognize at the nearby Top Mart. Spaghetti, bananas, cereal, the sushi wastefully wrapped in individual plastic sheets. Cigarettes.

In 2010, I expanded slightly, to orange juice and dried squid. Once I came back for a long haul in 2013, I still had to deal with the initial growing pains that seemed to crop up no matter how many times I’d moved back here. My comfort foods became those I had ordered enough that I didn’t feel like a fool when I would try to order them in the nearby restaurants. Kimchi Jjigae. Chamchi Gimbap. Dwaeji Gukbap (a soup so satisfying, they wrote a song about it).

Most of my meals were enjoyed outside of my home. Why? Partially because I lived alone and was too lazy to put any effort into making a meal for one. Maybe I didn’t always know where to go to buy what I wanted to make. But a lot of it was fear of looking like I didn’t know what I was doing. It resulted in lots of convenience store meals and, when I did decide to cook at home, a lot of microwave rice bowls and fried eggs. But, it doesn’t have to be that way.

Last year, my girlfriend and I moved in together. With it, a world of cooking at home expanded. Sure, I’d cooked some meals at home before. But, with an audience, the stakes got higher. I wanted to impress her with my expertise at not burning the water. I wanted a meal good enough I might eventually want to tell others about it.

We have cooked many meals together. With it, we’re creating our own subculture, separate but inspired by our mutual American roots, our Korean influences, and our mutual love of exploring the world through food. It’s uniquely ours.

In this ongoing series (the second time attempting such a thing, sort of), I am going to be posting some lovely photos of meals we’ve made and how we made them (the recipes we used, the places we procured the stuff needed to make them). “Best,” of course, is subjective. Sometimes “best” is exactly what you expect it to be: the highest quality something or another. But, sometimes “best” simply means the foods that helped get us over our growing pains.

TL;DR Here’s what we eat in Korea. Cooking at home doesn’t have to be scary. In fact, it can be an outlet for great joy, and it does not have to cost a fortune.

Creamy Mushroom Soup
(Adapted from this recipe on Serious Eats)

For this creamy mushroom soup, a blend of various mushrooms such as button, cremini and shitake is called for in the original recipe. However, we used two bags of shitake mushrooms (called “pyo-go-boh-seot,” 표고버섯) on discount (about 2,500 won a bag) from the Emart discount rack. 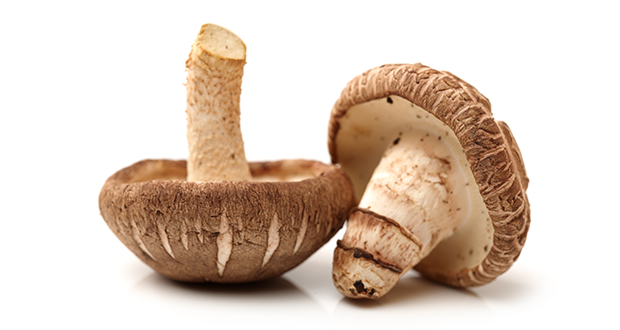 Discount racks are an excellent source of cheap vegetables that are still good, and definitely still good for a soup that will be blended like this. Shitake mushrooms can be particularly earthy, but it worked out well for this soup. If you want it a little milder, make sure to hold out for some discount button mushrooms, as well. 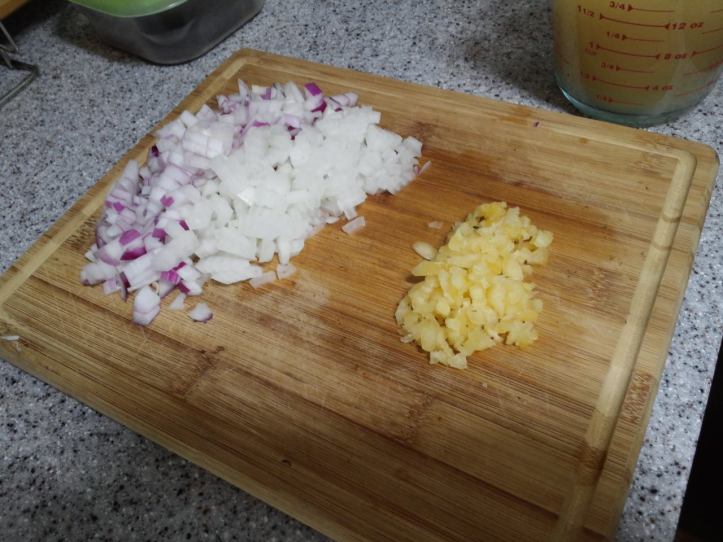 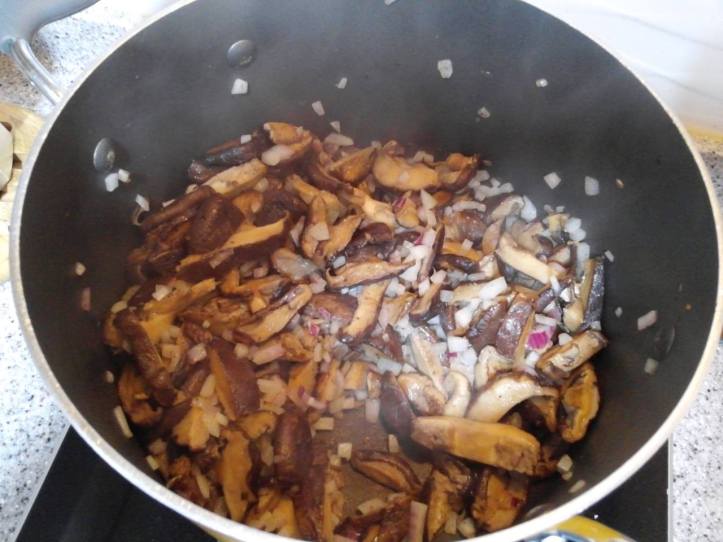 Other alterations to the original recipe included using about a tablespoon of dried thyme instead of fresh (I have never seen fresh thyme sold in Korea. If you’ve seen it, especially in Busan, please let me know where in the comments. Or, I could just try to grow it). White wine was used (some chardonnay from Chile that was at Kim’s Club for 13,000 won. Tres Palacionaois, or something like that. It’s fine, nothing special, not terrible). We minced five garlic cloves instead of four (because garlic), and our stock was a combination of a mushroom seasoning powder that can be found at any Korean mart or supermarket, as well as some old homemade vegetable stock that had been taking up space in the freezer for a couple months. Everything else was pretty much according to the recipe and can be easily found in most Korean marts and supermarkets.

Definitely buy an immersion blender if you see one at, say, Home plus, Emart, Mega Mart or somewhere else (you can also try GMarket). Or, if you happen to see some expat on their way out selling theirs. It is indispensable in the home kitchen. Here’s a good article from Bon Appetit on why an immersion blender should be in your kitchen.

We enjoyed this for dinner with a hearty salad, with lots of veggies grown locally (Busan Organic Vegetables, check them out!). We were stuffed and satisfied.

I hope you give this a try soon. It’s easy to make, with ingredients easily procured in pretty much any part of South Korea. And, it’s sure a lot healthier than McDonald’s delivery. The best part was the tons of leftovers that will be for lunch or dinner for the next several days, and the two bowls that are now frozen and ready for a dinner sometime in the future. And everything cost about 7,000 to 8,000 won.

Enjoy, and let me know how yours turned out! And, be sure to check out Serious Eats for this and other great recipes and kitchen tips.